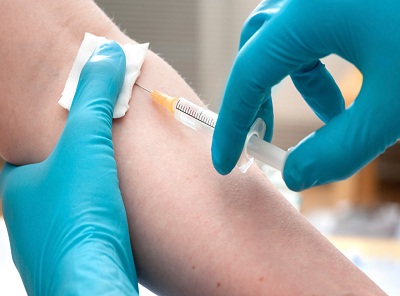 The development of TB disease is a two stage process. In the first stage, known as latent TB, a person is infected with TB bacteria. In the second stage, known as active TB or TB disease, the bacteria have reproduced sufficiently to usually cause the person to have become sick.

A diagnosis of active TB can only be confirmed when there is definite evidence of TB bacteria in the person’s body. Some of the diagnostic TB tests look directly for TB bacteria. Others such as the chest X-ray look for the effect of the bacteria on the person suspected of having TB.

Chest X-ray as a TB test

If a person has had TB bacteria which have caused inflammation in the lungs, an abnormal shadow may be visible on a chest x-ray.1 Also, acute pulmonary TB can be easily seen on an X-ray. However, what it shows is not specific. A normal chest X-ray cannot exclude extra pulmonary TB.

Also, in countries where resources are more limited, there is often a lack of X-ray facilities.

The TB skin test involves injecting a small amount of fluid into the skin in the lower part of the arm. Then the person must return after 48 to 72 hours to have a trained health care worker look at their arm. The health care worker will look for a raised hard area or swelling, and if there is one then they will measure its size. They will not include any general area of redness.

At Summit Urgent Care we offer TB testing for our patients. If you are in need of a test, just walk in to one of our clinics.

When you need to see a doctor NOW for injury or illness, Summit Urgent Care is convenient and available without an appointment, 7 days a week. 365 Days a Year! We have locations in East Point, Newnan, and Fayetteville, GA. Servicing the nearby cities of Sharpsburg, Peachtree City and College Park. Every member of our team has the same patient focus and is dedicated to delivering the best possible care.